The Trinity Gardens Bowling Club occupies part of the area known as The Trinity Gardens Soldiers’ Memorial Reserve Inc., which is bounded by  Canterbury Avenue,  Hereford Avenue,  Albermarle Avenue and  Litchfield Crescent. The Reserve comprising of 2 and a half acres was handed over by a “Declaration of Trust” to the Payneham Council on July 2nd, 1924 by the Trustees of the Holy Trinity Church – to be used by the local residents for recreational purposes.

November 26th 1925   A public meeting called by the Council was held at the Wellington Road School and a committee was formed to control the area. The area was initially fenced off and let for grazing purposes at  2/6p  a week.

July 6th 1928   A small hall was opened and became the administrative centre for the Reserve.

August 4th 1936  The inaugural meeting, for the purpose of forming a bowling club was held in the Trinity Gardens Reserve Hall.

August 18th 1936  The first committee was formed with F .Goldring  elected as President 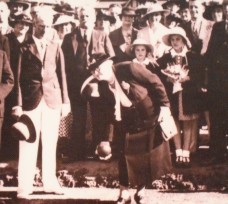 November 21st 1936    Mrs Martin ( wife of the chairman of The Payneham Council ) rolls the first bowl at the official opening. On her right is Mr Frank Goldring  ( The first president of the club )

The only amenities the Club possessed in the early days were brush shelters at either end  of  “A ” green. Players used the facilities of the Reserve Hall. The Tennis Club provided afternoon tea for the members at 6d. per member, which was raised to 1 shilling when the Croquet ladies took over the refreshments.

1947 / 1948  Competitions between Trinity Gardens and Glenunga commenced. They played for The Parker Shield which continued up until ?

1948   A cyclone memorial fence replaced the former hedge on the western side and some of the name plates can still be seen today. 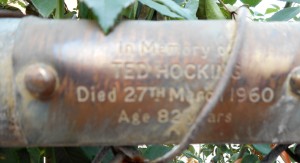 # See below for names on plates fixed to our fence.

The main entrance gates were donated by Mr. W.P.Crowhurst, founder of Solver Paints, and a valued member of our bowling club.

1950    The women were invited to join with the men. Their first President was Mrs. C. Sandow.

1951 / 1952  Club Rooms were officially opened by President Cliff Thompson who had been instrumental in its planning and construction.

1960    Annual pre-season matches between Trinity Gardens and Croydon commenced. The Dix Shield was donated by Mr and Mrs C. Dix.

The Bowling Club took over the area used by The Croquet Club when that club ceased to function and decided to plant “C ” Green.

Trinity Gardens had some notable successes held by the R. S. A. B. A. 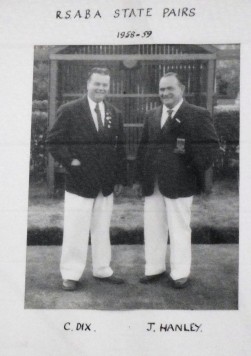 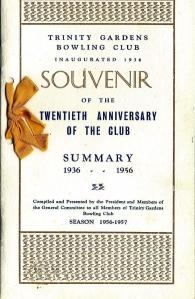 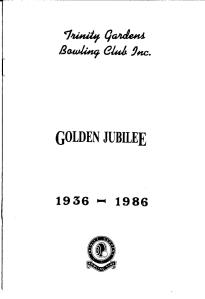 The above information was condensed from the following booklets provided by Bob Docking.

# Thanks to Bob Docking for making the name plates on our fence legible.

For Bob Docking’s Recollections over past 30 years